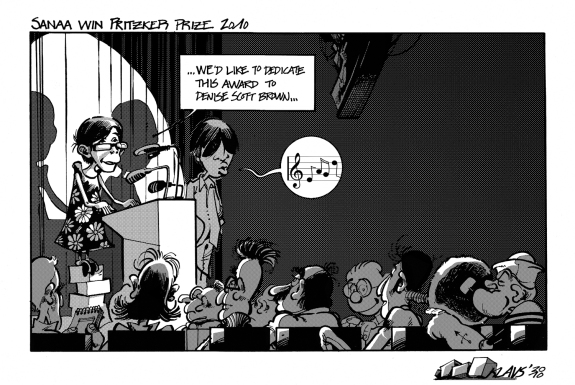 Kazuyo Sejima and Ryue Nishizawa, partners in the architectural firm, SANAA, have been chosen as the 2010 Laureates of the Pritzker Architecture Prize.

“This marks the third time in the history of the prize that two architects have been named in the same year. The first was in 1988 when Oscar Niemeyer of Brazil and the late Gordon Bunshaft were so honored, and the second was in 2001, when Jacques Herzog and Pierre de Meuron, partners in a Swiss firm, were selected. Japanese architects have been chosen three times in the thirty year history of the Pritzker Architecture Prize—the first was the late Kenzo Tange in 1987, then in 1993, Fumihiko Maki was selected, and in 1995, Tadao Ando was the honoree.”

“For architecture that is simultaneously delicate and powerful, precise and fluid, ingenious but not overly or overtly clever; for the creation of buildings that successfully interact with their contexts and the activities they contain, creating a sense of fullness and experiential richness; for a singular architectural language that springs from a collaborative process that is both unique and inspirational; for their notable completed buildings and the promise of new projects together, Kazuyo Sejima and Ryue Nishizawa are the recipients of the 2010 Pritzker Architecture Prize.”

— Excerpts from the  Announcement of the Pritzker Prize 2010