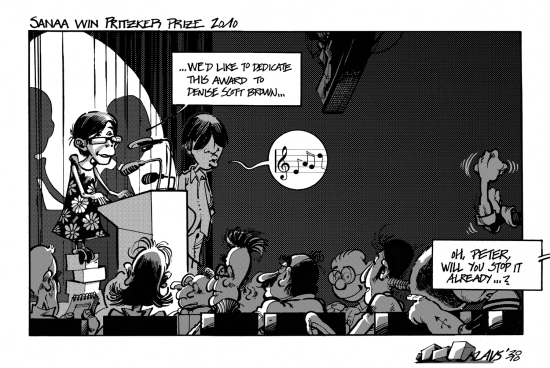 Now that’s been a couple of weeks after the Pritzker Ceremony, and following my policy of never publishing anything when it’s due, I decided to finish the month with a little recap. This is the way the cartoon was supposed to be on the first place, but I felt that the in-joke departed too much from the real message, and that it might be misleading. But Zumthor is always so funny (I may be one of the twoo or three people in the World that think this, I know). Now that I look at it, I’m a little bit intrigued by the metonymic Popeye connection that arose spontaneously on the right. I’ll have to explore that in the future.

If you don’t know what this is all about, check here

And now, a few links:

Plataforma Arquitectura reviewed the ceremony and kindly uploaded some photos, which can also be found in their mirror site in English Archdaily.

Also, The New York Times offers its own set of pictures, along with insightful statements both about and by some of the assistants:

‘Frank Gehry (’89), whose own Pritzker ceremony took place in Nara, Japan — “As a student, I learned how to make tatami mats and was in a gagaku orchestra,” he reminisced — could be spotted in head-to-toe black and, at 81, looking slimmer than before. “I go up and down,” he shrugged.’

Such a pity we weren’t invited.