Earlier this month Rem Koolhaas returned to the Harvard GSD in order to give one of his infrequent and multitudinous conferences. Filed under the motto “current preoccupations”, the talk, which replayed Koolhaas’s October lecture at the Barbican, showcased a bunch of different issues taking place on and around OMA’s office. And so, it was presented as a  halfly-articulated progress report that allowed Mr. K to adopt his improvisational approach to discourses of late. One of the highlights of the session  was, of course, Project Japan, Koolhaas&Obrist’s book on Japanese Metabolism and its heroes, which Koolhaas surprisingly used to grieve (again) for a lost mediatic aura that architects still had in Kikutake’s times: Today, architects have increased public notoriety at the expense of credibility. It’s hard to argue against that, even if Koolhaas’s argument, namely that an architect has not made it to the cover of Time Magazine since Phillip Johnson did in 1979, is itself pretty bland, and also a little too pro-establishment for OMA. So, in a nutshell, architects get more screen minutes today, but fewer quality minutes. However, on the one hand, Time Magazine does not hold the qualifying power it did four decades ago (if it did then). But also, Time is possibly less a desired media to be featured on today which, regardless of its historical pedigree, has a much lower impact capacity.  And above all, it does not offer the type of mediatic plateau that Koolhaas and OMA have needed to shape and sell their elusive brand image throughout the last decades.

It’s also rather amusing to hear  Koolhaas, who revels in giving conferences that are rather rock concerts than intellectual debates, complaining about the caricaturization that comes with the mediatic ubiquity of architects. Especially when he himself has been one of the main actors in the postmodern recovery of satire as a tool to (de)construct architectural discourse. Still, Koolhaas has always been a careful constructor of his own  legend, and it’s possibly here where this counterfeit argumentation, deceptively articulated as a complaint, fits -as well as his later mention of OMA’s production as modest, performance-driven architecture. Certainly, performance has always been one of the driving forces of OMA’s design, present in all-scales of his projects: It’s difficult to find an architectural practice that has put to better use Tschumi’s strategies of transprogramming,  from Jussieu to  Bordeaux, to the Kunsthal or to Porto, even if usually formalised as dis-programming. But the same could be said about Koolhas’s careful design of both his discourse and self-image, both an ongoing performance where statements can’t be taken at face value, and where there is a very conscious detachment between what he says and what he does.

“Modest” is not, however, an adjective that automatically springs to mind when thinking of OMA’s production, which since the late 80s (I’m thinking of the Congrexpo, but also of the CCTV building, the Seattle Library, the Casa da Musica at Porto,  or the unbuilt Córdoba International Congress Center) has bounced progressively towards the L-XL side of the scale. Funny, too, that he referred to the invisible quality that he found in some of his most recent buildings. Today architecture is mediatic as ever, but also fundamentally mediated by its public presence, and by the very nature of this presence in the new media. The flashy era of digital image/media/production has sworn much of current architectural production to immediacy and to a futile search for instant memorability that lead to an effective disappearance, both from perception and from memory: In a scenario where every building struggles to be distinct and claims desperately for attention, the cacophony of the whole inevitably results in a loss of the individuality of the pieces: All-new, all-different, they all look the same to the viewer. The cartoony aggregation of skyscrapers in the UAE desert that has become one of Koolhaas’s most celebrated images is pretty much the world OMA has helped create.

And then, he talked about countryside and preservation. 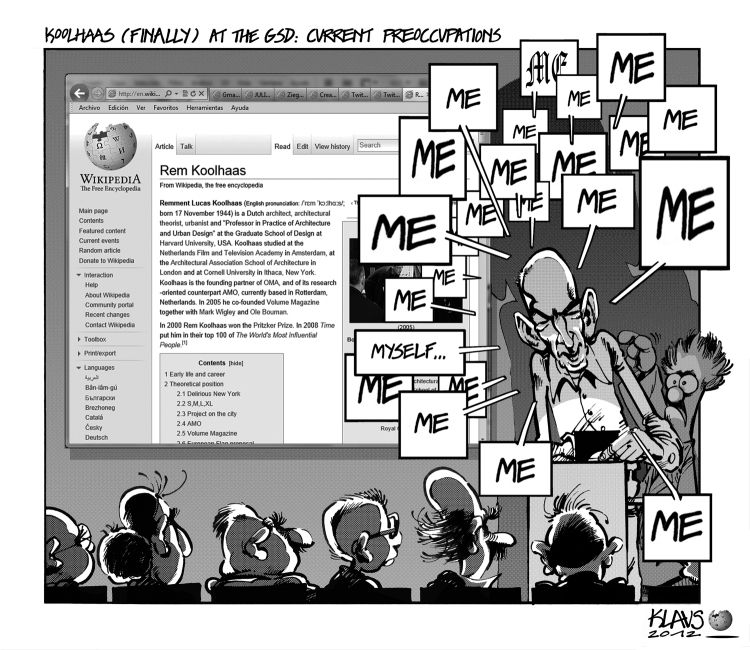 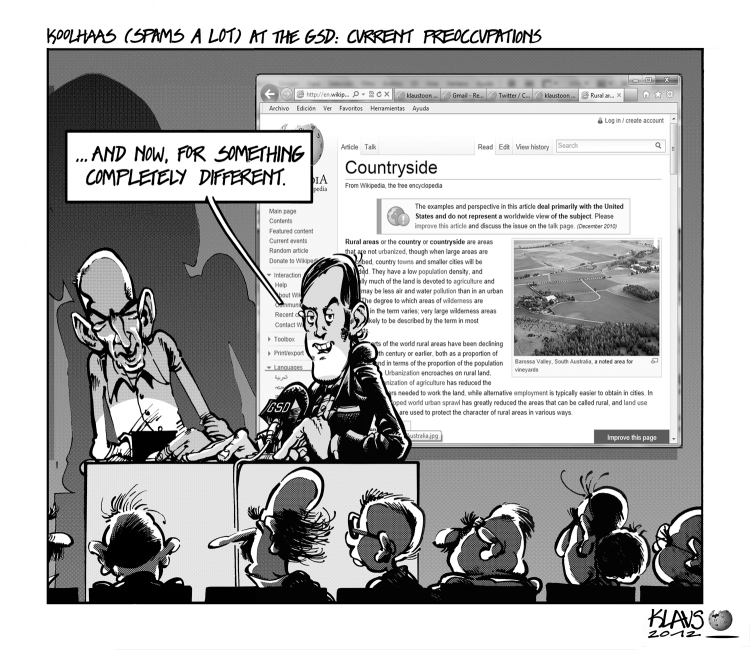 The video of the lecture used to be online somewhere, but apparently it has been taken down now. However, a full-length video of Koolhaas’s previous conference OMA: On Progress, dealing with the exact same issues is available on youtube, along with the rest of the talks at the Barbican in London: OMA: On Prudence (Victor van der Chijs), OMA: On Generations (Shohei Shigematsu), and OMA: On Speed in Architecture (David Gianotten and David Tseng).

Even more interesting are the two shorter, “unofficial” videos that the people at Dezeen produced on the occasion of the opening of the OMA/Progress exhibition, where Koolhaas offered an improvised tour through the still unfinished rooms. There’s something akin to a guilty pleasure in the domestic atmosphere those two videos exhale, especially in the first one, where Koolhaas goes room by room , talking to the camera that follows him as he strolls through the half empty exhibition halls and speaks briefly about each project in plain, unsophisticated words (providing some amusingly partial and clumsy descriptions). Of course, one always wonders how much of this is actually very consciously staged. Truth is, the nervous rush from project to project, which could help him empathize with the viewer, ultimately contributes to the halo of mystery that surrounds him, making him look somewhat uninvolved and uncomfortable -in a hurry to just get the task done (fragility vs. disdain). To my eye, it falls on the same strategy as his carefully careless lectures. I was tempted to count how many times Koolhaas uses the pet phrase “a kind of” throughout the video (but I resisted, so if anyone bothers to do so, please email me).

In any case, this unceremoniously rushed pace with which Koolhaas goes through OMA’s visual catalog confers the video an undeniable aura of authenticity that fits perfectly the un-beautiful aesthetics Rotor chose for the exhibition (many of the items lay bare, as if directly transposed from OMA’s offices, in almost-empty rooms), itself a pretty good encapsulation of OMA’s cold and deceptively spartan approach to design. Still, the second video, where “Koolhaas discusses two of his current preoccupations: the countryside, which he is addressing for the first time; and generic architecture, which could result in neutral, copyright-free building forms” is also worth watching. Actually, the whole OMA section on Dezeen is worth a look.

For a more accurate report of Koolhaas’s lecture at Harvard, with Michael Hays and Sanford Kwinter as partenaires, check “Goodbye stararchitecture”, by colleague and friend Zenovia Toloudi at Shift Boston Blog. A brief but interesting review of the exhibition can be found in Rory Hyde’s “OMA/AMO : Progress/Regress“, which looks back at the evolution of AMO and OMA’s production in the last decades, as portrayed by the changes in their subsequent publications and exhibitions, from Content (Neue Nationalgalerie in Berlin, 2003) to the Cronocaos installation they did in the Italian pavilion as part of the 2010 Venice Architecture Biennale, and finally to the Progress show in the Barbicane.

One thought on “Koolhaas at the GSD: Current Preoccupations”