Last, but not least on the list (too much, huh?) of interesting stuff I was somehow involved in busy 2013 was being featured in “Goodbye Topolinia” [Malcor D’Edizioni, 2013], a book on comics and architecture written by Laura Cassará and Sebastiano D’Urso. As Laura defines it, “the book is an essay, written side by side, on the mutual interferences between architecture and comics. It is not an encyclopedic compilation, in the sense that we had no intention to analyze all the episodes of the intersections between both disciplines. We were primarily interested in tracing the conceptual threads that make it possible to outline analogies between both artforms throughout their History. Obviously, the theoretical discourse was seasoned with countless examples, both of architectural and comic-book work, typically -but not only- in those cases where both categories converge in a narrative pertaining to one discipline or to the other.” [Excerpted and -freely- translated from a conversation between Andrea Alberghini and Laura Cassará in “Welcome ‘Goodbye Topolinia'”. Comics Metropolis, October 8 2013]

The book, which can be purchased online in different sites, for those not living in Italy, is certainly rich in examples, including most of the authors featured in our own MAS Context: Narrative, such as Chris Ware, Wes Jones, Tom Kaczynski, Jimenez Lai, Marc-Antoine Mathieu, François Schuiten, or Joost Swarte. On top of it, as the icing on the cake, the book opens with an introduction by Benoît Peeters, the other half in Schuiten and Peeters’ nearly mythical “Les Cités Obscures”. I suspect my inclusion in the book stems mainly from my presence at the 2013 Comicon in Naples, which makes me doubly indebted for the invitation. As usual, a big thank you to Laura, and Sebastiano for their interest [and an eventual follow-up this year. We’ll keep informing]. Below, you can check some pages from the book, and a short excerpt of the Klaus-related parts provided by Ms. Cassará herself.  For more information, provided you can read Italian, I would check the review of the book at Fumettologica.

And next week, back to cartoons.

“Comics relate to architecture also by means of irony and satire: so does Klaus, an architect who also draws comics. He treats serious issues posed by contemporary architectue with a light-hearted mood, and his drawings, while resembling cutting edge architectural projects, really call into question contemporary architectural statements. And so the competition for the Twin Towers reconstruction, after 9/11 attacks, is the chance to make fun of the entries submitted by archistars for the international invite-only contest. His analysis goes further, in search for similarities between archistars’ projects and cartoonists’ drawings, with quite a remarkable finding: in his own blog, he compares the House of Music in Porto, designed by Rem Koolhaas in 1995-2001, to the Metabunker megastructure, as conceived by Gimenez and Jodorowsky in 1992. The remarkable resemblance doesn’t mean Koolhaas project is not authentic; instead, it’s a proof that, using their imagination and creativity, comics creators are often forerunners of future architectural forms.” 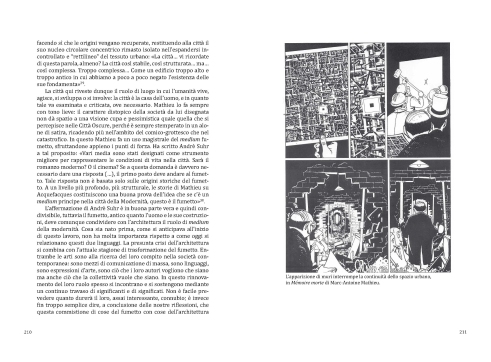