On these days of seclusion, internet is becoming for many, more than ever, the only contact with the world outside (as if it wasn’t before already, for some). And for those of us whose daily activities deal in one degree or another, with drawing, social media are offering a wide range of activities to invest our time and neglect our real work.

One such opportunities for procrastination is the CoronaMaison (‘CoronaMansion’) challenge, launched a week ago on twitter by French illustrator and webcomic author Pénélope Bagieu (@PenelopeB). The call was very simple: to design one’s ideal house for this confinement conditions, using a template provided by Timothy Hannem (@acupoftim). So far, over 1,000 people have contributed their own visions to this challenge, which can be checked clicking on the #coronamaison hashtag on twitter.

As an architect-cartoonist I thought I couldn’t let this opportunity to step in and bring some order pass. However, I failed miserably and just indulged in my usual obsessions. I had also thought of making a series out of this, each one with a different architect, but, knowing my lack of perseverance, I doubt it will ever happen.

Well, it was fun, at least. 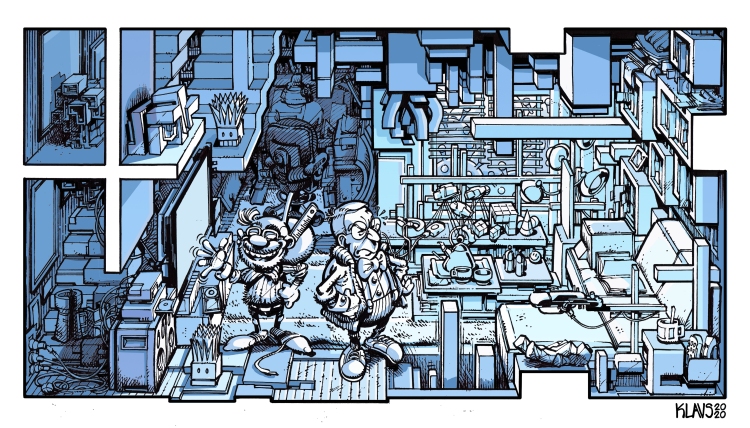 2 thoughts on “Eisenmansion (A Klaus Entry on the Coronamaison Challenge)”