So, before January is over, I’d like to post the first one in a series of posts that look back at some of the stuff that happened in 2013 but which, due to the hectic-ness of these last months, had to wait till now. So, as a starting point, I thought it would be nice to celebrate the imminent -and eminent- first anniversary of my ongoing collaboration with Uncube Magazine, a Berlin-based, online journal that has managed to make its own place in the netsphere through a steady flow of thematic, monthly issues, since August 2012.

Drifting a little from my usually elusive manners, I offered them to draw an egotistic strip, “Numerus Klausus”, commenting on current issues on and around architecture in my own section within the magazine, ‘Klaus’ Kube’. Of course, even though it started as a regular-looking comic strip, they soon talked me into doing something a little more complex -they didn’t have to try too hard. Some of the strips are still pretty elusive, but at least this time their backstory is easier to trace back. Also, the editors’ suggestions gave me the opportunity to feature a lot of guest stars, such as the inevitable Rem-the-Man, but also MVRDV, Rafael Viñoly, Renzo Piano, Kieran Long, Pink Floyd (seriously), Florian Heilmeyer, Sophie Lovell, Zaha Hadid, Gregg Lynn, sylvia Lavin, Jean Nouvel or Sigmund Freud.

Scroll down for the whole series (including two non-posted ones) 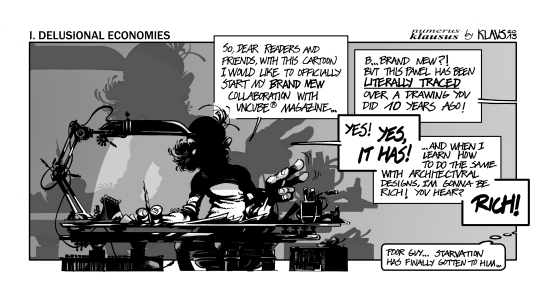 I. Delusional Economies, in Uncube’s blog 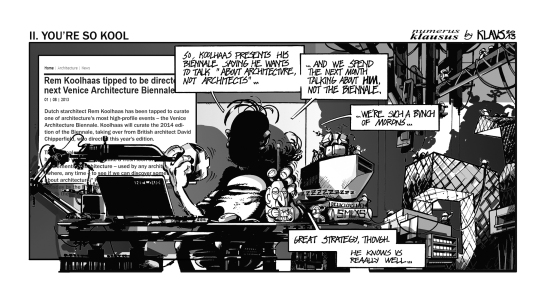 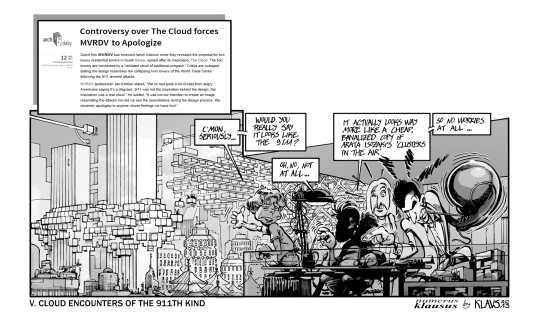 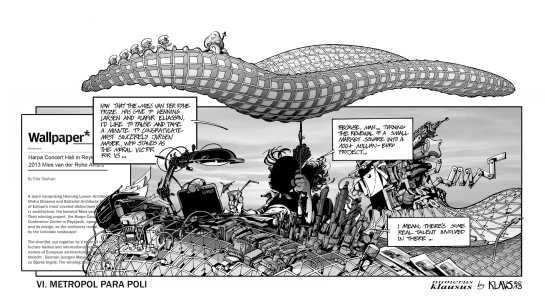 VII. Architecture, Mon Amour in Uncube Magazine #12: Into the Desert 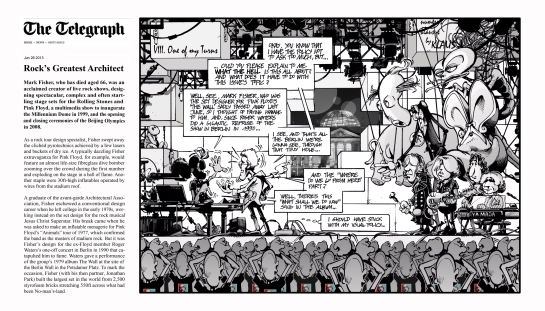 VIII. One of my Turns in Uncube Magazine #13: Berlin 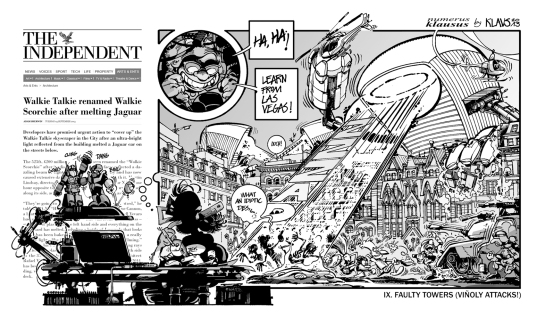 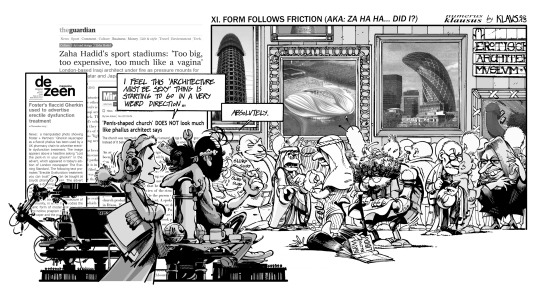 This last one came after a suggestion (as another one preceding it and yet one more to come) by Sophie Lovell, who thought it would be better not to have me making humor of anything Africa-related, and asked me to tackle on Zaha Hadid’s vagina-like stadium instead. I have to say that, were I an editor, the prospect of myself being given free reign to draw vaginas in the magazine wouldn’t make me any less worried, anyhoo… so, consequently, I took the opportunity to throw in some of all this phallic proliferation that’s been happening lately in architecture, ranging from Jean Nouvel’s dildo to Foster’s recently-flaccid Gherkin, China’s People’s Daily Newspaper circumcised HQ, or that infamous church that looks like a penis in aerial view (if you’re interested in this highly intellectual topic, check Cabinet Magazine’s 2003 Competition for the Most Phallic Building in the World). It also gave me the chance to feature Gregg Lynn and Sylvia Lavin (not her first time in the blog), who’s the subject of a cartoon I never get to sit and draw. Over there, writing on his blog in Providence, David Brussat identified this as an ITD (Internet transmitted Disease): “Klaustoon on Koolhaas and Penises” at Architecture Here and There.

Next issue, it  will be FAT time. 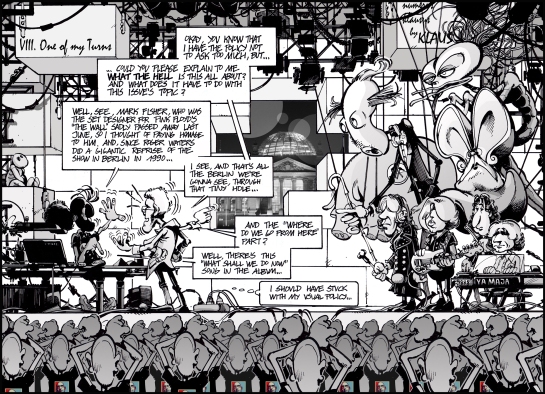 “He flew Tina Turner over her audience on a huge mechanical arm, drove U2 through their arena inside a mirror-studded lemon, and thrust the Rolling Stones between stages on a 45m-long telescopic bridge, complete with helicopter searchlights. The architect and set designer Mark Fisher, who has died aged 66 after a long illness, defined the rock’n’roll spectacular over the last 30 years, dreaming up ever more elaborate contraptions to match the wildest visions of his bands.

Vast inflatable characters were a regular feature of his shows, reaching a surreal climax when a 30m pig burst through a wall of 2,500 polystyrene blocks, for the ex-Pink Floyd member Roger Waters’s 1990 performance of The Wall in Berlin. Designed with Fisher’s then-partner, Jonathan Park, it was one of the most ambitious sets ever conceived outside an arena, with the wall marching 170m across the former no-man’s-land of Potsdamer Platz, before tumbling down in front of an audience of half a million people. A stage version of the show, which features flying puppets based on drawings by Gerald Scarfe – including a caricature of Fisher as a schoolteacher – remains one of the most complex rock shows on tour, costing almost £40m to stage.

Fisher’s designs always broke new ground in the sheer scale of their spectacle. For U2’s PopMart tour in 1997, he developed the world’s largest LED screen, stretching 50m across the back of the stage. In front of this glowing cliff of pixels rose a giant golden arch, in the style of the McDonald’s logo, from which a bank of speakers was suspended like a great basket of fries. Topping off this supersized satire of consumer culture, an illuminated olive shone at the end of a 30m cocktail stick.

“A rock show is a sort of tribal event in our culture,” said Fisher. “It’s preparing everyone for the arrival of the high priest.” In this case, the priestly vehicle took the form of a 12m-high lemon-shaped mirrorball, which flipped open to reveal the band inside. “The grail,” the designer would say, “is to give the audience something spectacular it really didn’t expect.”

Born in Kenilworth, Warwickshire, Fisher began his studies at the Architectural Association in London in 1965, where he was surrounded by the dreamy visions of floating cities and plug-in megastructures of the experimental Archigram group. Working on set designs for musicals after graduating, he was given the chance to test out his pneumatic ideas on Pink Floyd’s Animals tour in 1977, producing a striking inflatable menagerie that caught the imagination of bands and audiences alike.

Fisher designed the band’s lavish stage sets for the next two decades, culminating in a 40m-high tilting steel arch for the Division Bell tour in 1994. It was the biggest portable stage set of its kind; it took three days to erect the 700-tonne steel structure, three versions of which were fabricated, in order to leapfrog between venues on 53 articulated trucks. […] One of his most elaborate bespoke designs was “the Claw” for U2’s 360 tour, a 180-tonne steel arachnid that loomed over the stage, enclosing the band along with several thousand members of the audience.

“He was an architect with an extraordinary imagination,” says U2’s manager Paul McGuinness. “He turned everyone’s wild ideas into steel and lumber and canvas reality.” It was a reputation that drew a stellar client list, with Fisher crafting extravaganzas for everyone from Elton John to Janet Jackson, Lady Gaga to Take That, Madonna to Metallica.

Outside the world of rock’n’roll, he was invited to work on the opening ceremony of the Beijing Olympics in 2008, constructing a glowing telescopic “dream sphere” around which swarms of acrobats performed. For the Commonwealth Games ceremony in Delhi in 2010, he developed an ingenious system of hanging everything off a 90m-long inflatable structure, as the suspended floor of the stadium could not take high loads. […]”

The original cartoon can be found as originally published in the “Klaus Kube” section of Uncube Magazine #13: Berlin, edited by Florian Heilmeyer, Jessica Bridger, and Elvia Wilk.