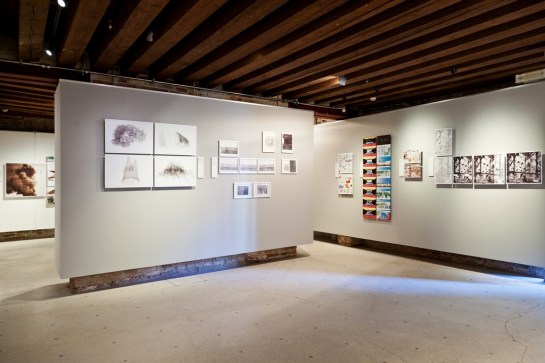 From June 10 to July 3, 2016, the Ca’ Pesaro Museum of Moder Art in Venice will be holding the exhibition Drawn Theories / Teorie disegnate. The exhibition, curated by Sara Marini and Giovanni Corbellini, and organized within the international research project Recycle Italy ‘collects an international landscape of authors who express their positions about recycling in architecture through drawing’. Among some nice graphic installments by more apt professionals, it also features a sequence of drawings by yours truly, which show the shameless recycling of a drawing that was itself using elements from a previous commission. Seeing the whole ensemble, which includes works from some usual suspects such as Jimenez Lai or Wes Jones, I wonder whether I should have produced a piece exclusively for the show, but timing forbade. 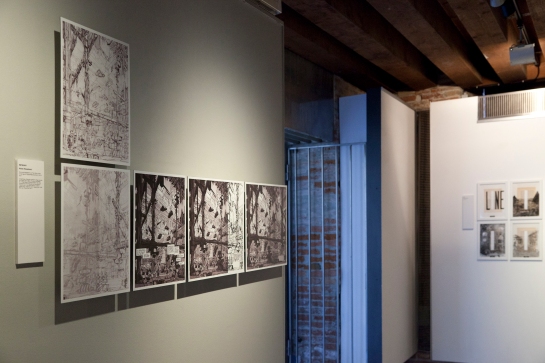 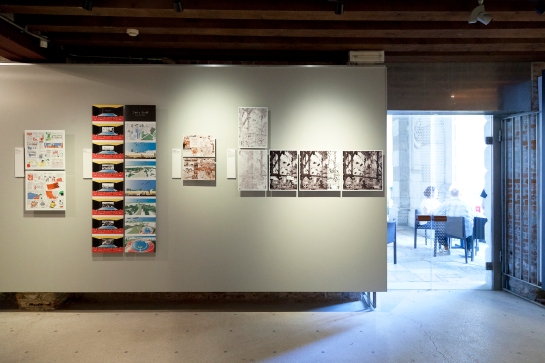 The inauguration took place be on June 10 at 4 pm at Ca’ Pesaro, ground floor, in the rooms for the small temporary exhibitions. However, if you won’t be able to attend it while in the gallery, the exhibition will later  be set up at Tolentini for the PRIN Re-cycle Italy final conference on September 30, 2016). 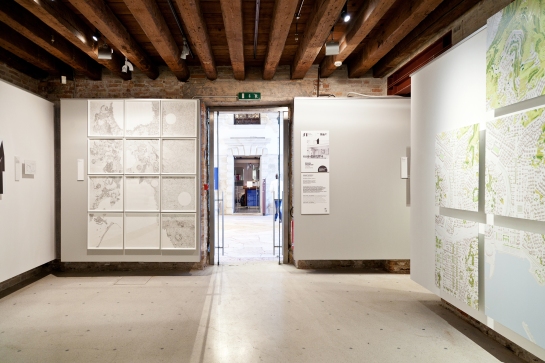 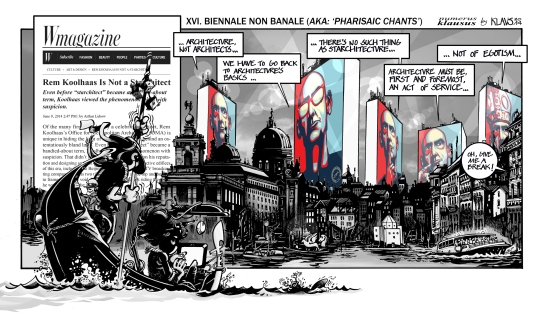 So, in order to continue adding my dubious contribution to Archdaily’s celebration of Mr K’s 70th birthday, here you have a cartoon originally published in Uncube Magazine #23, Mexico City. This one was drawn by the time the Biennale opened, some months ago, but since it overlapped with some other Koolhaas-related cartoons (see Clog, for instance, or my previous post for Arquine), I decided to keep it for the Biennale’s closure. Now that time has arrived, and the fact that it now overlaps with Koolhaas’ b-day just makes it all more deliciously graphic. I’m not going to enter again the debate on how this Biennale, with its allegedly anti-star system approach, works too well as a self-celebrating vehicle: -“Let’s talk about architecture, not architects”. – “Where’s that motto from?” – “From Koolhaas’ Biennale.” By excluding everyone else, Koolhaas makes himself the only character in his own show, which unfolds to the viewer in all its full-fledged, pseudo-analytic banality. I would say “I already toldya so”, in my first contribution for Uncube, but I doubt there was anyone who thought otherwise when it was announced.

Ahhhh… rants… what would life be like without them? 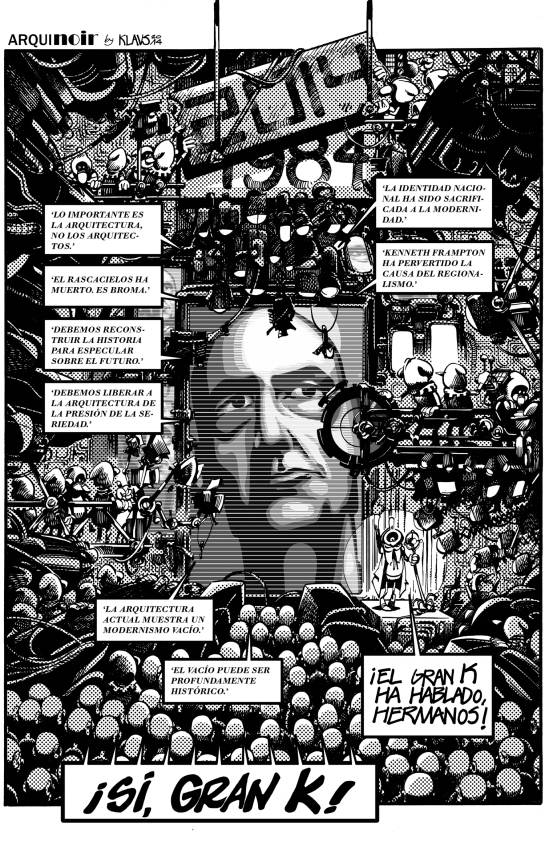 So, apparently -and because they directly told me so- the guys from ArchDaily are up for celebrating Rem Koolhaas’s 70th birthday, which seems to be today. They made an online request “to post video and/or visual tributes to Rem to your social media accounts using the hasthtag #Rem70″. I’m still trying to figure out how anyone would think anything I could do would honor him in any way; but, just to join the party, here you have the cartoon and text published in my “ArchiNOIR” section in Arquine #68: Fundamentales. In their pristine, Spanish translation. Alternatively, you can check another take -in English- on the same subject, in my contribution to CLOG: REM. More on that later.

“[…] For those who were already, let’s say, ‘architecturally active’ in the 90s, the second half of the decade featured an increasing presence of Koolhaas-isms in the architecture published  by architectural media. Be it young offices paging Bakema through the Educatorium (those ubliquitous ‘single surfaces’ Jeff Kipnis still chitchatted on in his lectures more than ten years later), forests of tilted pilotis, cheap rubber surfaces or else, OMA’s supposed ‘house style’ had permeated through a whole generation that made justice to the old Spanish writer’s adagio: “Blessed are our imitators, for theirs will be our flaws”. Because, notwithstanding their varying degrees of success, none of those byproducts of OMA’s discourse seemed able to grasp its spirit. And it still goes on… monkey see, monkey do.

But, which is this discourse? Certainly, Koolhaas’ scant prose is, within its own scarcity, rich in suggestive, elusive terms: Manhattanization, Junkspace, Bigness -and you really know you have made it when Hal Foster writes a review of something like the Harvard Design School Guide to Shopping [ii]. However, as in Foucault’s Other Spaces/Hetrotopias, these are texts and terms that one seems to be able to make less sense of with each subsequent reading. All in all, it seems just a private a game, carefully designed to keep his audience intrigued while feeding his own legend by building an aura of impenetrability, to the point that one’s tempted to believe that every move is carefully staged: His carefully careless lectures, his unsophisticated, even clumsy descriptions of his own buildings, or his nervous, uncomfortable responses in interviews, all contribute to enlarge the halo of mystery that surrounds him. And, as I deduce from his always packed , rock-star-like conferences, it definitely works.

Five years ago, I published the first ‘Hope’ cartoon, with Mr. K posing as Shepard Fairey’s Obama. Five years later, I still wonder how many people did not get it was a joke.”

So, in a sort of smart, happy and -also- inevitable move, the guys at Clog magazine sort of celebrated their 3rd anniversary (really, 11 issues already??) with their issue CLOG: REM, just in time for the Biennale. They also thought –as, apparently, everyone else– it was sort of inevitable to ask me to contribute. Of course, they were particularly entitled to, since they made sure to have me in Clog from the very beginning. Just  click on the “clog” tag in this very site and you’ll get the idea. Also, they decided to open the issue with my contribution, which was very nice on their part. Thanks, guys! Oh, and a tip of the hat to Benjamin Greaves (@MrGreavesSays) for providing me with the title.

P.S.: For those among you who may have noticed, I’ve made a point of celebrating the 5 anniversary of “On Starchitecture” by using vriations of the “Hope” cartoon on all my contributions published around the time of the Biennale’s opening (all of them revolving about REMdamentals, of course). So far, you can check “Fundamentally… Myself” (in Spanish) in Mexican Magazine Arquine #68, and Keep your eyes open for Uncube #24: Mexico City.

They’ve built schools like wedding cakes and are making a real-life gingerbread house with Grayson Perry. But the UK’s most playful practice is breaking up after 23 years. They have built a romanesque church out of sparkly blue sequins, a school that looks like a gothic wedding cake and turned the head of Hercules into a squishy seat. Now, in an unexpected twist, the mischievous London architecture practice FAT has announced it will be no more. Architects usually die, divorce, or go bust – so why the boyband-style break-up?

“We all feel we’ve completed what we set out to do,” says Sam Jacob, who has worked with fellow partners Sean Griffiths and Charles Holland for the last 23 years on everything from art installations to social housing, alongside a prolific volume of writing and teaching. “FAT was only ever intended to be a project, a way of taking a set of ideas out into the world,” he says. “We still can’t believe we’ve had so many opportunities to make buildings.” […]

The three partners have yet to announce their future plans, but will end their collaboration at the Venice Architecture Biennale next summer, where they are curating the British Pavilion with Dutch practice Crimson and writer Owen Hatherley.

“They remain open to offers for a lucrative reunion in 20 years’ time,” concludes the official press release. “We’ve got to go on a victory tour,” grins Jacob. “Bands used to take 30 years to reunite, but nowadays they’re back together in a couple of months, so who knows …”

The original cartoon can be found as originally published in the “Klaus Kube” section of Uncube Magazine #18: Slovenia, edited by Sophie Lovell, Florian Heilmeyer, Jessica Bridger, Elvia Wilk et al. And yes, that is Foster’s “Cycling Utopia” (for God’s sake…) in the foreground.

A tip of the hat to Sam Jacob and the rest of FAT. I’m really sorry to see them disbanding, but I’m also looking forward to seeing what comes out of this in the future. Best of lucks!

Ok, let’s see if I can bring this back on trail. I really need to catch up with the blog.

This comes from Uncube Magazine # 07 : Off-places. The published version is slightly different. In the same issue, there’s an interview with Gottfried Böhm by Florian Heilmeyer which is really worth checking, if you’re a Brutalist fanatic such as myself. So go check it.

Koolhaas receives the Golden Lion at Venice, possibly awarded to his groundbraking film “The Towering Inferno”.

The Golden Lion for Lifetime Achievement for the 12th International Architecture Exhibition (Venice, Giardini and Arsenale, 29th August – 21st November, 2010) has been awarded to the  Pope of Architecture, Rem Koolhaas. The decision was taken by the Board of the Biennale di Venezia, chaired by Paolo Baratta, upon the proposal of the Director of the 12th Exhibition, Kazuyo Sejima.

“Rem Koolhaas has expanded the possibilities of architecture. He has focused on the exchanges between people in space. He creates buildings that bring people together and in this way forms ambitious goals for architecture. His influence on the world has come well beyond architecture. People from very diverse fields feel a great freedom from his work.“

Original announcement at the Venezia Biennale Webpage, at Art Knowledge News, Artdaily,  and a selection of pics at designboom.

Don’t know what this is about? Check here, here and here.