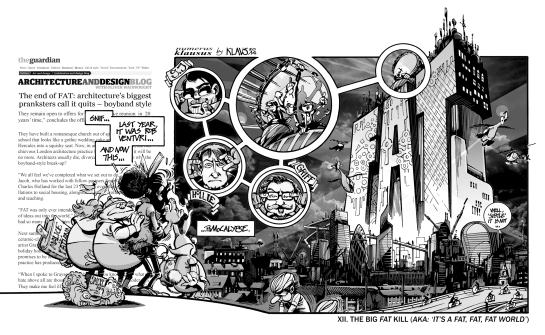 They’ve built schools like wedding cakes and are making a real-life gingerbread house with Grayson Perry. But the UK’s most playful practice is breaking up after 23 years. They have built a romanesque church out of sparkly blue sequins, a school that looks like a gothic wedding cake and turned the head of Hercules into a squishy seat. Now, in an unexpected twist, the mischievous London architecture practice FAT has announced it will be no more. Architects usually die, divorce, or go bust – so why the boyband-style break-up?

“We all feel we’ve completed what we set out to do,” says Sam Jacob, who has worked with fellow partners Sean Griffiths and Charles Holland for the last 23 years on everything from art installations to social housing, alongside a prolific volume of writing and teaching. “FAT was only ever intended to be a project, a way of taking a set of ideas out into the world,” he says. “We still can’t believe we’ve had so many opportunities to make buildings.” […]

The three partners have yet to announce their future plans, but will end their collaboration at the Venice Architecture Biennale next summer, where they are curating the British Pavilion with Dutch practice Crimson and writer Owen Hatherley.

“They remain open to offers for a lucrative reunion in 20 years’ time,” concludes the official press release. “We’ve got to go on a victory tour,” grins Jacob. “Bands used to take 30 years to reunite, but nowadays they’re back together in a couple of months, so who knows …”

The original cartoon can be found as originally published in the “Klaus Kube” section of Uncube Magazine #18: Slovenia, edited by Sophie Lovell, Florian Heilmeyer, Jessica Bridger, Elvia Wilk et al. And yes, that is Foster’s “Cycling Utopia” (for God’s sake…) in the foreground.

A tip of the hat to Sam Jacob and the rest of FAT. I’m really sorry to see them disbanding, but I’m also looking forward to seeing what comes out of this in the future. Best of lucks!

“Why is it the tallest? I don’t really remember. I don’t really care. It was actually taller at the beginning, it was 400 meters, but then aeronautics came and they said that you can not because you interfere with the flight of the air planes. So we broke it. The building is now 310 meters but it is still designed to go up to 400 meters. Many people still believe it is unfinished… this idea is part of the game in some way,” says Piano in the 20 minute interview.

“As an architect you have a very dangerous job to perform. Dangerous for you but even more dangerous for other people. Because if you do something wrong it is forever. I think it [The Shard] is fine. I stopped crossing my fingers only a few months ago. You do everything you can to make it right but the truth is that you only understand at the end when it is built if it is right or wrong. I was not very good at school. I grew up with the idea that what you do is fine but it is probably not good enough. And so even now at 75 I still feel that every time I do something right it is a miracle. I don’t live in the sensation that everything I do is right. It is always a great surprise.”

Responding to criticisms that The Shard is a symbol of the welath dividie in London, Piano says that only 50 or 60 of the 10,000 people that will visit The Shard every day could be classified as rich. But he agrees that £25 is too much to charge to access the viewing platform at the top of the building.  “£25 is too much but in this town everything costs too much… I agree it is too expensive. Because one of the aims of this building is to give London back to the people and to be public. But this is the normal price. If you go to the top of the Empire State building you spend more than that.”

— Anna Winston: Renzo Piano: “I don’t really remember the reason why The Shard is so tall. I don’t really care.” BD Online.co.uk | 22 February 2013

Er, Renzo, let me remind you. It’s that tall because you all wanted to make A SHITLOAD OF MONEY. 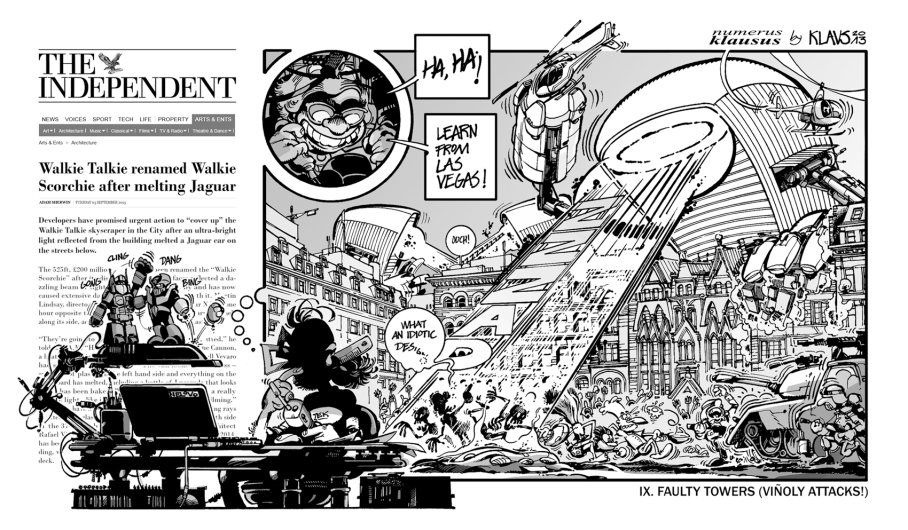 “Developers have promised urgent action to “cover up” the Walkie Talkie skyscraper in the City after an ultra-bright light reflected from the building melted a Jaguar car on the streets below.

The 525ft, £200 million building has been renamed the “Walkie Scorchie” after its distinctive concave surfaces reflected a dazzling beam of light which blinded passers-by and has now caused extensive damage to vehicles parked beneath it. Martin Lindsay, director of a tiling company, left his Jaguar XJ for one hour opposite the building, and returned to find warped panels along its side, accompanied by a smell of burning plastic: ‘They’re going to have to think of something. I’m gutted,” he told City A.M. “How can they let this continue?

Eddie Cannon, a heating and air conditioning engineer, said his Vauxhall Vevaro had suffered similar damage: ‘The van looks a total mess – every bit of plastic on the left hand side and everything on the dashboard has melted, including a bottle of Lucozade that looks like it has been baked. When I got in the van it was a really strange light – like it was illuminated and they were filming.’  David Banks, a PR consultant who felt the force of the intense beam, said: “It is like a huge lens. It is magnifying the sunbeam. It’s like trying to fry ants with a magnifying glass.” He added: “It was uncomfortable to be underneath and I was conscious that it was probably unsafe to spend too long under that particular beam.” Mr Banks expressed concern that the blinding rays could impair motorists’ vision. Joint developers Land Securities and Canary Wharf said they are looking into the incident. In statement they said: “As a precautionary measure, the City of London has agreed to suspend three parking bays in the area which may be affected.”

Rafael Viñoly said he designed 20 Fenchurch Street “to respect the city’s historic character, following the contour of the river and the medieval streets that bound the site, while further contributing to the evolution of the high-rise building type.” […] 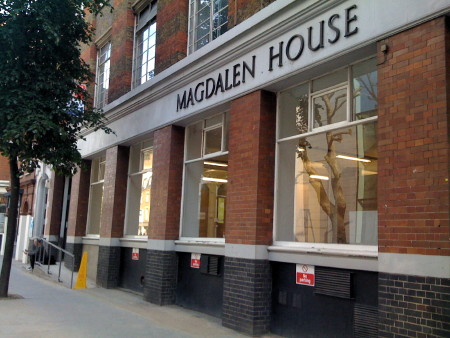 On Tuesday, July 24, I will be opening a small exhibition at the Architecture Foundation in London. The exhibit will be housed as an installation within an exhibition in the context of Jimenez Lai’s super-furnitured Three Little Worlds, currently at display at the AF. Klaus Toons, which will feature a few cartoons blown up to poster size, will be on display till August 18 (but there’s a trick to that). I’m really thrilled by the fact that for the launching event, I’ll have Tomorrow’s Thoughts Today’s Liam Young on my side joining for a conversational presentation, which will hopefully help me overcome my natural inarticulateness and add a note of quality to the event. A big thank you to the people at the AF (with a special acknowledgement to Justin Jaeckle) for their interest, and to Jimenez, for getting it started. I hope he already recovered from sleeping on my couch.

The pic on top should be a cartoon that waits somewhere on my computer to be finished. More on that later. (And of course, for our Italian readers…)