“A decade now, one of Manhattan’s most distinctive icons, that which Baudrillard offered as the perfect architectural embodiment of the simulacrum of the model, disappeared from the island’s skyline.

There are other über-New Yorker architectural icons, of course. Earlier and more widely broadcasted for the better part of the XX century, the Empire State and Chrysler buildings are expressive of a former New York defined by constant competition where each new building sought to top the preceding “…each of them the original moment of a system constantly transcending itself in a perpetual crisis and self-challenge.” In Baudrillard’s discourse, the two towers of the World Trade Center put an (architectural) end to this scenario of vertical competition and mutual building suspicion: The effigy of the capitalist system(Baudrillard again) passed from the pyramid to the perforated card, and the twin WTC towers, perfect parallelepipeds looking like the mute, anonymous, indifferent to competition columns in a statistical graph, gave architectural shape to a system that was no longer competitive, but compatible, a new scenario where competition was substituted by correlation.

The twin towers represented, the end of competition, but also, within Baudrillard’s history of simulacra, the end of all meaning, for they were a pure (architectural) sign, already born replicated. Its meaning destroyed by the duplication itself, the denaturalized Janus of New York’s old World Trade Center ended competition, but did not offer an iterative, serial alternative. If the doubled tower captured and aroused, as Baudrillard put it, the closure of the system in a vertigo of duplication, it also exuded a balance that did no open the door for a longer seriation. It was a series closed on the number two, just as if architecture, in the image of the system, proceeded only from an unchangeable genetic code, a definitive model. Much as it implied the very idea of the series, the World Trade Center was not (mean to be) part of  one, in the same way that it was not an original and its copy. And it was this dichotomy between singularity (one single design) and duality (two towers), and between repetition and the negation of indefinite serialization which helped build the strong iconicity of the pair. (…) Baudrillard also pointed out the iconic power of the parallelepipedic asceticism of the towers. The simple, subtly postmodern ornamentation of the prisms’ skin just contributed the minimum amount of materiality via decoration so as to keep the icon on this side of the line between the real and the ideal.

The undeletable presence of the towers in the collective eye-mind of the society, standing in a liminal space reserved to few image/icons, can be grasped in the shadow of a literal rebuilding, improbable as it was, which still glided over the early discussions on the plans for the reconstruction of ground zero. Certainly, the re-erection of the towers in the wake of their thirtieth anniversary would have taken the issue of duplication to a whole new level, introducing a new number two in the equation. Adding to the preservation of the icon -for the inevitable price of erasing memory-, the cathartic Phoenix-like rebirth from the ashes would have definitely settle the towers in a timeless plane, outside the historical timeline delineated by the products of the skyscraper race, which constructed a traceable history of the development of New York. Unleashing an endless flux of meta-readings, the (re)duplicated -doubly duplicated- WTC would become, in a tongue-twisting mishmash of pairing Baudrillardian tropes, a replica of a simulacrum, a literal copy done to stand for the original in its own location once this has disappeared, which would suggest the unleashing of a Sisyphean process of reconstruction that would endlessly rejuvenate the towers through consecutive fancies destruens. A rather effective alternative to literal reconstruction, Richard Nash Gould’s Tribute in Light/ Towers of Light offered a comparably meaning-full replication that would have been much more effective if (boldly)placed within the void footprints of the towers, which would have turned the lightbeams as much a follow-up as a replacement. Standing like a Gilmourian -or Wateresque- fleeting glimpse, the volumes of light would have appeared as an ideal(ized) recreation of the absence of the towers through their ethereal presence, which inverted the very presence of the original towers in the city: invisible by daylight, material at night, but now suitably devoid of substance.

None of this subtlety made it, however, into the proposals that sought to fill both the physical and functional, as well as iconic void left by the towers, whose double shadow was cast, tilted, twisted, glorified and glossified, and of course, suitably banalized in most of them (…) Standing completely out of the sensibilities where these architectural delicatessen were bred, only the unpopular, unsexy proposal by Eisenman’s Dream Team (Meier, Eisenman, Gwathmey-Siegel, minus Graves and Hejduk, plus a particularly fitting Steven Holl) seemed to want to play on the grounds of the original World Trade Center, tackling on the same issues that had shaped Baudrillard’s reading, as well as the traits that provided it (them) with its iconic aura: replication, refusal of verticality, stripping the form down to a Platonic level. If the Twin Towers both called for and negated the possibility of extending the series they created, Eisenman&friends solved this dichotomy by interposing a new order (…) Indeed, as interwoven as it was within the trajectory of its designers, there is very little in the way of the architect’s presence within the design, very little that had not been there already.  Other than that, the project was pervaded by an asceticism, a lack of gestures, determined to prevent the architect’s persona from showing, as well as to avoid any assertion of the project’s “object self” that would undermine the cupio dissolvi of the new towers within the memory of the former. Ironically, due to their kinship with Eisenman’s language of pure sign, the Tic-Tac-Towers stood as semiotic ghosts (a personal favorite among Gibson’s constructs) of their past selves, so, unlike their twin ancestors, they were signifiers with a very specific meaning, and certain representational requirements.

(…) In the shadow of this proposal, itself reveling in the shadow of the WTC Twin Towers, the underwhelming banality of the finally constructed Freedom Tower becomes doubly (inevitable, wasn’t it?) disheartening, both for its imposingly dull presence and because of the absence it implies. (…) For all their onanistic absurdity, the masturbatory excesses of some of the other proposals were still preferable to the coitus interruptus of the final built form of Liebeskind’s proposal. A compromise on top of a compromise (…on top of a compromise), the single tower at Ground Zero works as a perfect statement of architectural inanity. (…)”

The cartoon that opens this post was originally meant for a post entitled with it “In the Shadow of No Towers -Ten years After”, intended to be published on September 11, 2011, to commemorate the 10th anniversary of the 9/11 events and celebrate the late twin towers of the WTC. However, although the cartoon itself was finished in time, several circumstances worked together to prevent it from being uploaded that day, and I decided to put it to sleep till a better occasion would come.

That better occasion (much better, indeed) was the publication of the third issue (ICON) of Milano-based magazine STUDIO, which were so kind as to publish it, and gave me the opportunity to expand the ideas I intended to tackle on in the original post into a full-length (longer than I remembered, actually) article, with a new ilo, too. The magazine, whose previous issues included contributions from Alberto Campo Baeza or Vittorio Gregotti, Luis Úrculo, DPR-Barcelona, features articles by RRCStudio itself, as well as Fake Industries, Alicia Guerrero&Freddy Massad, Léopold Lambert (The Funambulist), Franco Purini, Wai Think Tank and many others.

The complete issue can be read in its entirety in ISSUU, or bought here, if you’re a paper fetishist such as myself. I’d strongly recommend to go through the whole, nicely designed issue, and mildly recommend to read ICONIC ON in full, which I believe makes a little more sense that way. Please, just skip all the typos which are there due to my inAbiliti to corrrect te ttexts once I’ve writen tHem. 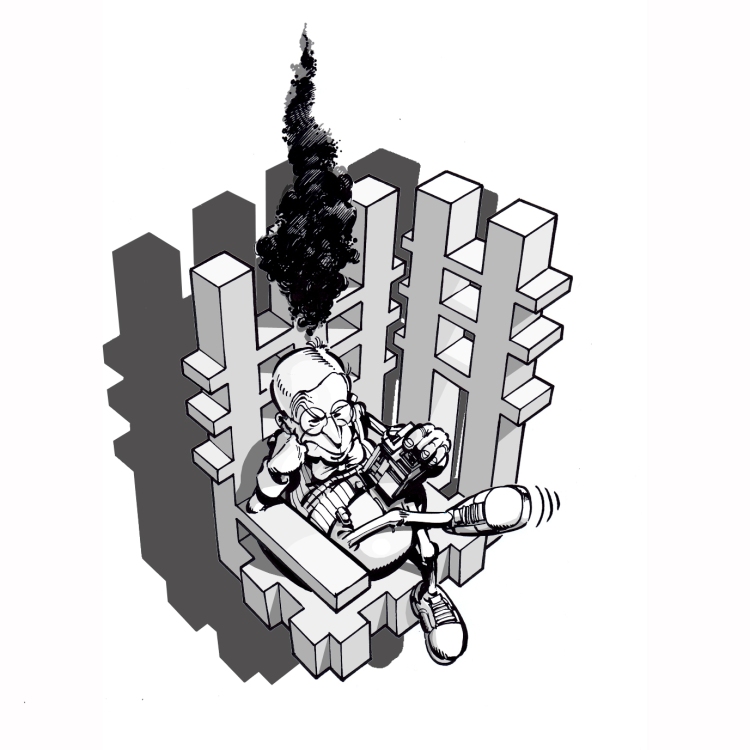